Abraxas Energy Consulting conducted an energy assessment for Lemoore Naval Hospital in Lemoore, California in June 2013. There are 2 buildings in the scope of this project at this facility: a 200,749 square foot hospital and a 23,540 square foot health clinic. The goal of the audit was to assist Lemoore in identifying and developing energy investment initiatives that achieved the federally required energy reductions. 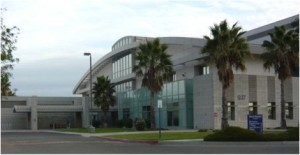 The energy assessment was performed in two phases, a Preliminary Assessment (Phase 1) and a Scoping Energy Assessment (Phase 2). Phase 1 consisted of a utility bill audit which established a baseline for energy and water usage and facilities benchmarking using energy Star Portfolio Manager. Twelve months of bills for water and gas, and electricity were used to conduct the audit. This generated a baseline for the energy/water/gas usage and utility costs, which was used in calculating potential energy savings. Energy Star scores were 8 for the hospital and 7 for the health clinic and the goal after implementation of conservation measures was to reach a score of 75. The calculated HDDs and CDDs provided insight to potential energy conservation measures.

The second phase used on-site visits with the purpose of identifying and quantifying cost-effective energy efficiency measures, water conservation practices and renewable energy measures. During the on-site inspection all the relevant information on the existing building conditions was collected. This on-site assessment included reviewing building and equipment data, interviewing site personnel, observing energy related equipment operation, and conducting some limited site measurements. Based on the inspection and calculations sixteen ECMs were recommended, as well as a list of administrative and operational measures that could be also implemented.

The largest opportunities for savings were found on converting constant volume systems to variable air systems at the hospital and on eliminating unnecessary runtime of HVAC systems by scheduling occupied and unoccupied setpoints in the existing EMS system of both buildings. Other ECMs found, affecting both or only one of the analyzed buildings, were time and temperature control of the hot water pump, installation of synchronous belts on AHU fans, installation of flow regulators on restroom faucets, installation of demand controlled ventilation on kitchen hoods, retrofitting of evaporator fans, replacement of evaporator fan motors and installation of advanced motor controls, occupancy controls for vending machines, lighting upgrades and controls, installing VFDs on AHUs and cooling tower fans, and replacing the centrifugal chiller at the hospital with a Turbocor chillers. Studies were also conducted into the feasibility of co-generation, renewable energy sources and retro-commissioning. These were preliminary assessments and based on the results, co-generation was not recommended based on the high estimated payback but should be considered following the implementation of other measures because that could increase the total heating load for the building increasing the operation time of the cogeneration plant and reducing then the payback. Renewable energy sources were not found to be cost effective. A full re-commissioning of the hospital building was recommended. The existing and proposed annual energy usage and cost for this project are shown below.

When implemented, the ECMs (including retro-commissioning based on the feasibility study) will save over $267,086 per year with a simple payback of 3.7 years. The list of measures is prioritized by simple payback such that short term investments are expected to be implemented first and longer term investments implemented last. Some interactive effects are accounted for in the calculation of energy savings such that if a different implementation sequence is followed the savings realized will vary to a degree. Total savings for electricity is 2,175,482 kWh/yr, for gas the savings is 49,093 Therm/yr, and for water savings is 235 MGal/yr. Total energy savings results in a 28% reduction in energy intensity. All values were evaluated using bin simulations and spreadsheet calculations based upon standard energy savings estimating methods and known and assumed operating conditions. Various incentives were identified through utility companies and various federal programs.