The following table summarizes the different cases of how to track energy savings with solar PV systems.

*Cases 5 and 6 require 2 meters, one for Grid kWh, one for Solar to Grid kWh

How Utilities are Handling Buying and Selling of Electricity

One major problem with net metering is that when the rate payer contributes energy to the grid, the rate payer is compensated in different ways depending on the utility.  We have identified three different methods the utilities are using to cost net metering below.  If you want a more complete rule book, then you will have to multiply the three net metering rate arrangements by the eight cases we went through, which would result in 24 unique cases.  And what is worse, there are surely more methods to apply costing than these three.

Below are the three cases that we have uncovered.

Duke Energy in North Carolina will credit the ratepayer for the contribution to the grid, but on the following month’s bill.  Duke rates are Class 2 rate.  The utility pays much less per kWh than it charges.  This is not made explicit on the utility bill.

The credits are banked, and can then be applied to the same month’s bills.  After 12 months, there is a True Up bill, where after any credits are applied to this 12th bill, the remaining credits expire and become worthless.

PG&E in Northern California bills solar clients a minimum connection charge and tracks the net energy that is being provided by the utility.  Net kWh = Bill kWh = Grid kWh – Solar to Grid kWh.  At the end of a billing year, the utility sends a true-up bill, in which the ratepayer is charged or given a credit for all of the power they contributed and/or took from the grid.  The monthly bills are small, but the annual true up bill can be very large.  PG&E and the other California investor owned utilities (SCE, SDG&E), buy and sell kWh at the same rate.  But, there is one exception.  If there is a net credit due to the ratepayer at the end of the year, the utility will pay a market rate per kWh ($0.03 to $0.04) rather than the retail rate. 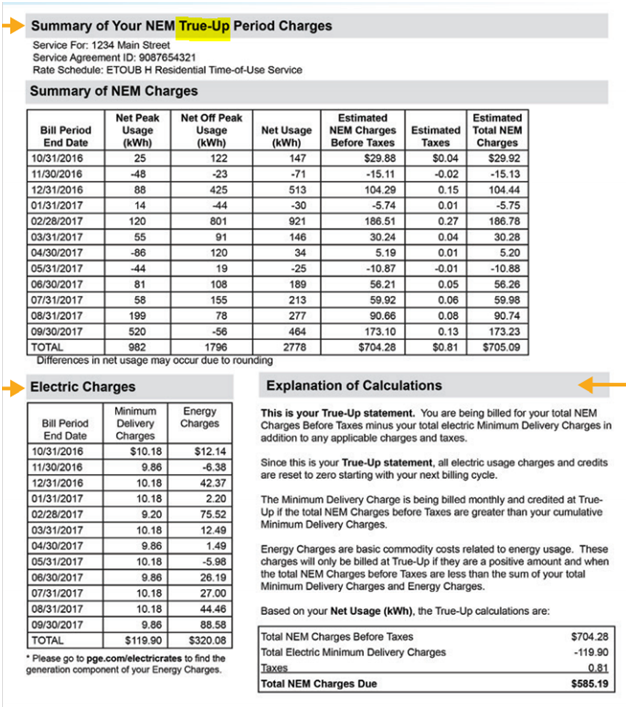 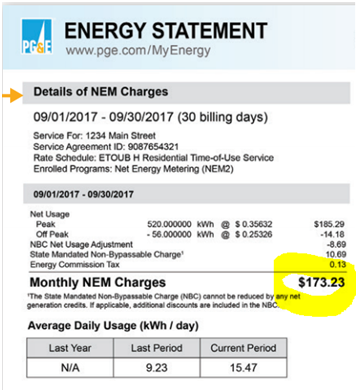 The way that pricing is handled can further complicate your estimation of savings.

How Does Battery Storage Complicate Matters?

If a solar and battery storage combination is installed, the cases described here should be the same: