We treat solar like any other energy savings technology.

Since there is no solar PV system in the base year,

Except, no kWh is contributed to the grid by the nonexistent solar PV system, so 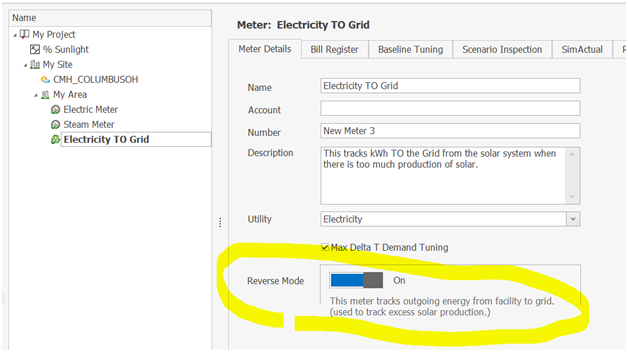 For Grid kWh, we take the pre-retrofit bills that did not use solar and do a regression on these bills:

As there is no solar PV system in the base year, we will use 0 as the baseline for Solar to Grid kWh:

For Actual data, we will have to track Grid kWh and Solar to Grid kWh.

For Grid kWh, then

To do this in Option C

In this example, we are given 2 days of usage in a month.

How to Handle Demand

You would treat demand almost exactly as you treat energy.  Solar to Grid kW is not tracked, so:

Another Way to Handle Solar

One problem associated with the method I described above is that your solar savings are going to be subject to changes in weather.  If a volcano blows up, or you have an unusually overcast summer, your solar system will not provide the savings you expected.  Assuming you only guaranteed 85% or 90% of what you expected the solar to provide, everything should work out.  But what if the variation is greater?

In general, over the life of a performance contract, weather fluctuations should even out.  So you can make a good argument for not addressing the variation of solar production due to weather.

However, if you want your savings numbers to not be at the mercy of weather, but only subject to how well the project performs, you could introduce a variable for solar.

There was no solar in the base year, but there is in the performance year.

This method is fair.  But there is an implicit assumption that TMY data is accurate, and there have been studies that show that TMY data seems to change every decade.

You are measuring the solar system’s production each year.  If you do this, then you would have to measure Building kWh at the building, which is Bill kWh during the base year, and it is sub-metered Building kWh during the performance period.  You would have to track savings for all ECMs except for solar using this method, and then add in the solar savings using the method we are speaking of now.

If you were to use Option C software, you can model this as follows:

If you want to measure Solar to Grid kWh, then you probably should just use the method presented above, where

I cannot think of any way to use TMY on this that is not too convoluted.  Fortunately, Solar to Grid $ will in most cases be very small.